Revision is hard. The deeper we dive in, sifting through sentence by sentence, the easier it is for our writerly lens to look at our creative work minutely through a magnifying glass. While details are important, every draft also needs us to look at it through the widest lens possible. A healthy panoramic view helps us take stock of the biggest building blocks of our story, where the toughest questions about our work-in-progress are waiting for us. Facing these big picture challenges head-on is crucial if we want to reshape our draft into the best story it can be, but the choices these challenges ask us to make are never easy.

…or are they? Sacrifice! says you can do it.

There’s a second revision habit that inspired Sacrifice! which I want to address: all addition with no subtraction. When it comes to incorporating feedback, I’ve watched young writers especially tackle the questions and comments they received by adding more, whether it’s more narrative (or stage directions), more dialogue, more conflict, or the biggest culprit of them all…more characters. New details are a key part of revision, sure, but to keep the drafts my writers are working on from becoming a balloon that’s about to burst I urge them to follow this simple formula: with every addition to a draft there must come an equal subtraction. “Cut a character?” becomes the immediate cry, “but how can I cut a character?!”

Therein lies the second reason Sacrifice! was born. A simple way to show writers that large scale cuts can be easy – and why they are necessary, too. Read on to find instructions for three versions of the game: the original version, a softer version for solo writers, and volcano version for any of you out there who facilitate writing workshops like I do.

If you are a writer of high school age or above currently revising a draft that is not your first attempt in particular genre, I encourage to play the hardest version of Sacrifice! as written below. While you may think I’m out to torture you, the simple fact is that every completed challenge will make your draft stronger. As you work through them, don’t forget to answer why you are choosing to sacrifice that particular part of your story or play – your reflections about why each of these cuts are necessary will keep you from making similar first draft choices in the future.

In this softer solo version, writers choose to sacrifice, save, or pass their way through the list of ten categories above using a 5-3-2 formula.

5 – Writers must sacrifice in 5 categories of their choosing, still listing their reasoning for the sacrifice after each choice they make as is the case in the original version.

3 – Writers can save themselves from making a sacrifice in 3 categories of their choosing; however, to do so they must commit to a specific revision idea that will make their draft stronger in that category. (For example, instead of sacrificing a character in Cutting Down the Cast, a writer can commit to making a specific revision choice that will make weakest character a more integral part of the story.)

2 – Writers can pass from making a sacrifice in 2 categories of their choosing, no questions asked.

Playing sacrifice with a group of writers (ages 13 to infinity) begins the same way as the 5-3-2 version above; however, if you click here you can download a convenient handout to help your writers. 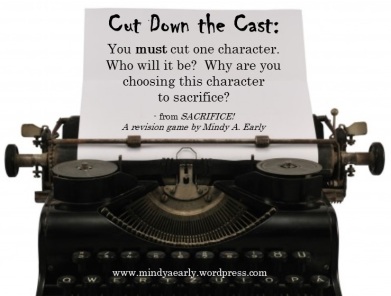 The value of working with a group of writers is in Part II – celebrating the sacrifices. To do this, ask each writer to select a sacrifice to share with the rest of the class. Writers should select a sacrifice to share that they are a) proud of making, b) includes a reflection or lesson that may benefit their fellow writers. If you want to make their sacrifice special, instead of having them write it out on a regular slip of paper ask them to write it out on these cute typewriter notes.

Next, have the writers stand in a circle with their sacrifices and select something to serve as the volcano. (The volcano can be something as simple as a hat or a bowl, or you can get really creative and tape some cardboard flames around a trash can!) One by one, in no particular order, ask each writer to march ceremoniously to the volcano, read their sacrifice out loud, crumple it up and hold it over the mouth of the volcano. Each time a writer holds a sacrifice over the volcano, have the class cry “Sacrifice!” and applaud as the writer drops the paper into the volcano. As that writer exits the circle, the next writer should enter, and so on until all of the writers have made a sacrifice. If time permits, it’s always a great idea to ask writers to reflect on how making that sacrifice feels – even if it’s a one word reflection.

Good luck, writers, and remember that making sacrifices during the revision process is important! Feel free to post about your Sacrifice! experience in the comments. Remember, whenever I post an activity, prompt, or guiding writing exercise in the Support For Writers section of my site, I will always write a blog post about the activity as well. That way, if you follow my blog you’ll always know when new exercises become available.